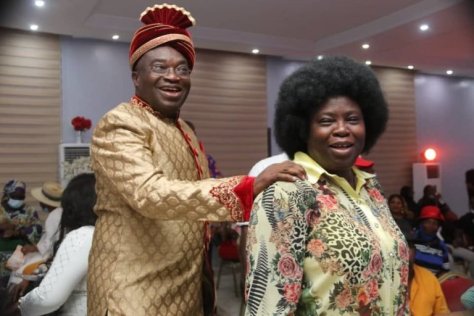 Hon. Alex Ikwechegh was a special guest at the small private ceremony which held at the couple’s private residence in Umuobiakwa, Obingwa Local Government Area of Abia state.

Speaking with correspondents, after calling at Ikpeazu’s home, the philanthropist described the Abia state Governor as his old time friend.

He wished the celebrants; Dr. Okezie and Nkechi Ikpeazu many more years together as a great couple in unity and love, including celebrating their golden and diamond jubilee in good health, in years to come.

Recall that Ikpeazu and Nkechi got married in 1991. The Governor had earlier revealed he would marry the first lady over and over again, describing her as a formidable pillar of support. 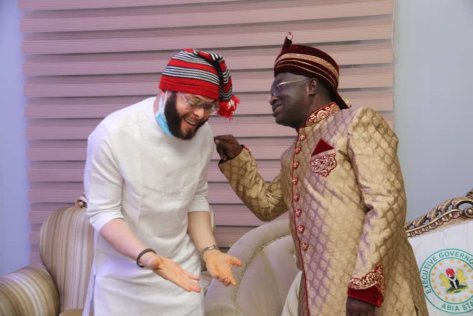 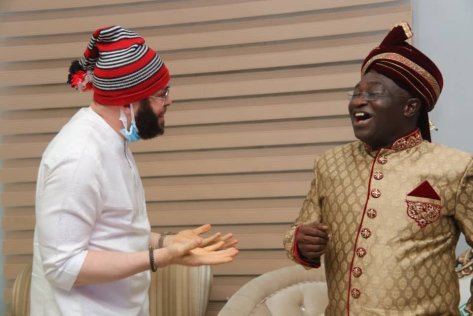 By Ogochukwu IsiomaRenowned Nigerian philanthropist, Chief (Hon.) Alex Ifeanyi Mascot Ikwechegh, has bagged the prestigious Northern Women Assembly (NOWA) Award of Excellence. Igbere TV reports that the Founder of Alex Ikwechegh Foundation and Aba-born philanthropist was honoured and decorated on Wednesday as an “Icon of Hope” to the less privileged by NOWA.According to NOWA, Ikwechegh was honoured in recognition of his “immense contribution to Humanity via philanthropy, Women/Youth empowerment, Societal Development and Nation Building.”Speaking at the Award giving ceremony, in Lagos, leader of the NOWA visiting delegation described Ikwechegh as an Icon of Hope to the downtrodden in the society.She said Ikwechegh had touched the lives of many in the society through his Alex Ikwechegh Foundation including empowering the women/youth and donating to orphanage homes.The NOWA team said they chose to identify with the renowned philanthropist in view of his great achievement and contribution to the society and humanity.Reeling out his list of achievements while reading out Ikwechegh’s citation, NOWA described the awardee as “erratic, creative, super-intelligent and has a multitude of talents that are respectable and enviable.”“He is extremely hardworking, and goal-oriented. Hon. Alex Ifeanyi Mascot Ikwechegh is simple, humble, classical and very special. And has great characters that are extremely admirable and adorable.”While applauding the award recipient, the NOWA team said, Ikwechegh was being recognized due to his “contribution and commitment to Community, Humanity and Societal Development.”“This auspices award is no doubt a product of your tireless and relentless efforts”, describing Ikwechegh as a “man of substance.”“This award is not only an indication of how great you are, but also a sign of greater, higher and better things to come,” NOWA added.They applauded Hon. Alex Ikwechegh for his great leadership style, quality and capability of carrying responsibilities and rendering himself to the service of humanity.On his part, the visibly elated Hon. Alex Ikwechegh while thanking the NOWA leadership for the kind gesture, reiterated on his commitment to keep doing good in the society.He said he never knew he was being watched, and vowed to renew his contribution to humanity, community and societal development through his Alex Ikwechegh Foundation.Hon. Alex Ikwechegh, the Nkuma Dike Ndigbo, has through his Alex Ikwechegh Foundation, donated to the poor and carried out several philanthropic gestures across the country.His distribution of free fuel and kerosene has become an annual event in the whole of Abia state, a gesture which marks the philanthropist’s August 25th birthdays.During the coronavirus-imposed lockdown across the country, Ikwechegh embarked on free distribution of palliatives to the people of Abia state.He also, through his Alex Ikwechegh Foundation, donated cash gifts and other items to widows in Abia and offset the hospital bills of many including a woman whose fingers were allegedly cut off by Fulani herders in the State.Hon. Ikwechegh had in 2019 donated household items including mattresses, pots, buckets, food items and clothing to victims of police attacks in Ndiegoro, a community in Aba South local government area of Abia.Also not left out in Alex Ikwechegh’s numerous philanthropic acts is the NEPA cash office in Igbere, which now wears a new look, following its reconstruction by the philanthropist.In the area of security, because Alex Ikwechegh believes his people must be protected at all times, the Aba-born philanthropist has carried out donation of vehicles to several vigilante groups.As a lover of education, Hon. Alex Ikwechegh has thousands of students under his Alex Ikwechegh Foundation scholarship scheme including pupils and students from Abia.He singlehandedly reconstructed the Igbere Community secondary school in Igbere, Abia State, and has continued to donate millions to uplift the downtrodden and orphans in the society.PHOTOS: 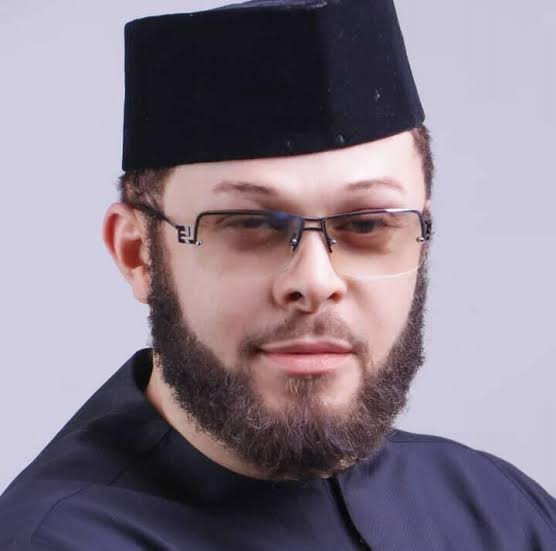 Here’s a video of Alex Mascot Ikwechegh as he speaks on #EndSARS disturbances across the country:

He has consistently shown decorum, class and humanitarian disposition, though he has not held any political position since leaving office 10 years ago as the youngest elected Local Government Chairman in Nigeria at 27.

To commemorate his birthday he has opted to share palliatives to the people from his personal accruals. The palliatives will run from 24th of August to 26th as follows:

And on that 26th of August, Cash gifts will be proffered to widows, and the disadvantaged in society. This will happen from 2.00 pm prompt from Okigwe Road Primary School Aba.

As one of the notable young leaders that have emerged in Abia and Nigeria as a whole Chief Alex Ikwechegh has shown what leadership should be; he has supported both citizens and leaders of Aba North and Abia State as a whole, he has given benevolently to the disadvantaged consistently, and has shown that the Youths are the future of Nigeria with positive governance initiatives. As such, we call on all youth full leaders of Abia State in particular to emulate these positive leadership examples and ensure we self guard the future of our State. The only way to achieve that is by consistently focusing on citizens and our upgrades no matter whose ox is gored.