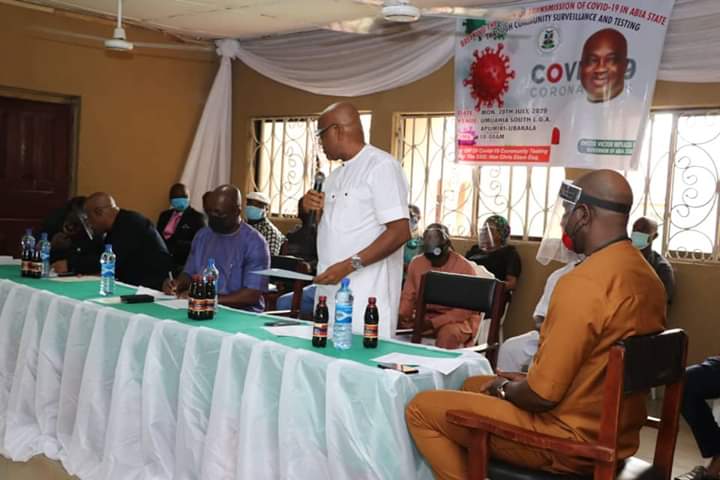 Governor of Abia State, Dr Okezie Ikpeazu, today flagged off the coronavirus (COVID-19) community surveillance and testing program which is aimed at breaking the chain of transmission in the state and stem community spread of the disease.

Speaking during the flag off at the Umuahia South Local Government headquarters, Apumiri Ubakala, on the theme: “Breaking the Chain of Transmission of COVID-19 in Abia State through Community Surveillance and Testing”, the Governor who was represented by the Secretary to the State Government and chairman of inter ministerial committee on COVID-19, Barr Chris Ezem, stated that the exercise which demands maximum support from the citizens should be taken seriously. He noted that Abia State is the first state in the South East to embark on such mass community testing against COVID-19.

The Governor noted that testing positive to the virus is not a death sentence as patients are being nursed back to health at the state’s isolation and treatment facilities while advising that those who test negative should continue to adhere strictly to the COVID-19 protocols already given which include: maintaining social/physical distance of a minimum 2 meters, use of nose mask, regular washing of hands under running water or use of hand sanitizers and avoiding crowded gatherings.

The State Chief Executive warned that failure to observe the laid down rules will result to enforcing a total ban on social gatherings in the State.

Earlier in his speech, the State Commissioner for Health, Dr Joe Osuji noted that the virus which broke out on the 31st of December, 2019 in Wuhan, China, has spread across the 36 states of Nigeria and FCT, hence the need for all states to take necessary measures to break the chain of transmission and flatten the curve as quickly as possible.

He commended the Governor for his efforts against the spread of the virus in the State while thanking the Chairman of Abia State COVID-19 task force, Barr. Chris Ezem for his coordinating efforts so far.

He informed that the ministry of health has trained frontline contact tracers and sample collectors in all the LGAs of the state with the aim of carrying out the massive sampling and testing of a target of 10,000 samples across the 17 LGAs in the state, an exercise which took off today the 20th of July, 2020. He further stated that the main aim of the initiative is to break the chain of transmission through the identification of cases, isolation of positive cases, managing the symptomatic back to health, contact tracing and monitoring of all the LGAs.

In a welcome address, the Transition Committee Chairman Umuahia South LGA, Dr. Max Ndukwe Adindu, noted that the event is an evidence of commitment of the state government to the health care of citizens and residents of the State and commended the Abia State Government for its doggedness in combating the spread of the virus. He urged Abians to cooperate and support the initiative by submitting themselves for the test.

While thanking the Abia State COVID-19 taskforce for their proactive measures, the LGA Chairman noted that the distribution of palliatives by the Abia State Government is still ongoing whereas other states have long stopped delivering to citizens.

In their goodwill messages, the Permanent Secretary, Ministry of Health, Chief Eze Egbulefu, the Executive Secretary, Abia State Primary Health Care Development Agency (ASPHCDA), Dr. Chinagozi Adindu, and the representative of World Health Organizations (WHO) partners, Dr. Linus Okoro, lauded the Governor for always leading in the fight against COVID-19 and for showing a high level of commitment towards the wellbeing of the people of Abia State. He also commended the efforts of the task force team, noting that all measures put in place to curtail the spread of the virus will yield positive results.

In her vote of thanks, the State Epidermiologist/Incident Manager for COVID-19, Lady Peace Nwogwugwu, thanked the government of Abia State for the massive support to the fight against the virus and urged Abians to volunteer themselves for the mass community testing so as to ascertain their health status.

The event which featured collection of samples for COVID-19 testing from volunteers was well attended by dignitaries in the State such as the Commissioner for Information, Chief John Okiyi Kalu, Abia State Head of Service, Sir Onyi Wamah, Head of Service Umuahia South LGA, former Commissioner Bureau of Training and Establishment, Lady Elizabeth Uhuegbu, Traditional Rulers of communities in Umuahia South LGA in the State amongst others.