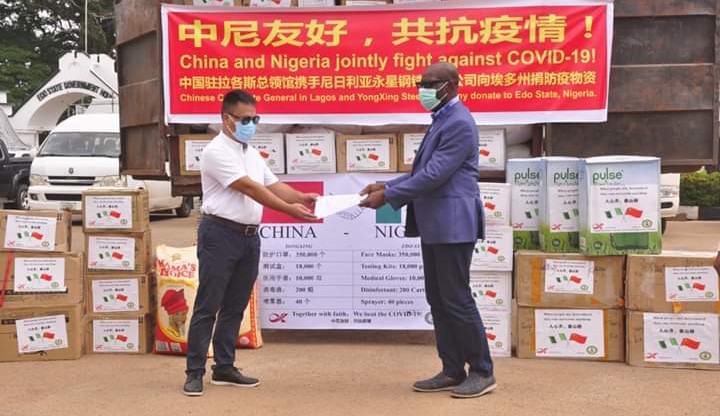 A Civil society group, Concerned Nigerians in Edo state, have condemned the action of the Edo state governor, Mr Godwin Obaseki in accepting so-called health packages from China, home of the dreaded Covid19.

This follows the Governor’s announcement that the
Yongxing Steel Company, a nail factory which operates at Utesi, in Ikpoba-Okha Local Government Area (LGA) of Edo State gave the state government:
*350,000 facemasks
*10,000 pairs of medical gloves
*18,000 pieces of test kits
*200 cartons of disinfectant
*40 pieces of decontamination equipment.

The governor who said the items were worth over N120 million from the management of Yongxing Steel Company argued that it, ” is one of the largest contributions we have received in the fight against COVID-19″.

He also said that the donation, “will further bolster our efforts as a government at curtailing the spread of coronavirus in Edo State”.

But Concerned Nigerians in Edo state in a press statement by it’s Chairman, Don Pedro Obaseki Jnr. said the action of the Governor is anti-people at a time citizens are apprehensive about China and its products.

“Edo is a state governed by law and order and unconstitutional acts like this must be condemned by all and sundry. The state is protected by law and the governor swore to protect the lives of all citizens, but this is a wrong decision as the lives of Edo people is now at stake”.

The group called on the state governor to as a matter of urgency stop any attempt to distribute any of the items because the public will reject them as unhealthy and dangerous.

“What has a Chinese company which manufacture nails got to do with face masks and test kits for Covid19? If they wanted to help Edo people they should have donated the money instead”.

The group also said, “What we are witnessing today is a failure of leadership in Edo state. Governor Obaseki is very insensitive and in his desperation to remain in office is ready to mortgage the lives of Edo people by exposing them to Chinese products and China is the origin of Covid19″.

“It is also pertinent to say that the state governor will do well as a matter of urgency to destroy all the items from the Chinese or return them to the donors and ask for cash instead. Anything short of this is unacceptable to us and to the generality of Edo people”.